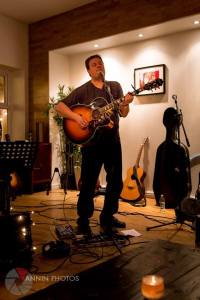 Hard work and persistent graft has begun to pay off handsomely for one of the island’s most prolific performers and songwriters.

Years of tireless work, writing and recording his own compositions and playing countless gigs in bars and festivals have led local singer songwriter Ian Thompson to sign a licensing deal with a top American independent record label, Spectra Music Group. The three-year deal has initially seen him submit a selection of previously recorded work to the label, who will release a select couple of songs worldwide, the first of which is ’Inspiration’ with the possibility of an entire album’s worth to be released in the near future.

’They are considered to be the biggest independent label in North America,’ said Ian.

’I don’t know much about the American acts that they have on there, but I do know that they have Paul Young on their books. There are a few others on there too, big names.

’I’ve been sending my songs around for a long time, but they got in touch, saying they like my music, and that they like my voice.’

It is a mouth-watering prospect that would excite any musician, but Ian is determined not to get carried away with ideas of success.

’It’s quite exciting. Being signed by a label has been a big surprise.

’I think they just want to take it in stages. If my songs sell, then they will take it to the next stage.

’It’s a three year deal, which is longer than I thought it would be, but I don’t want to get over-excited by it, as it hasn’t really happened yet. It’s a chance more than anything at the moment.

’I don’t know what to expect, so I’ve been playing it down a bit.’

Ian has been recording his songs entirely on the island, using local music producers Gypo Buggane, Simon Harvey and Phil Reynolds, using their studios here rather than the UK.

’They have all been really good at what they do. For a small place there is everything you need here.’

Ian moved to the island seven years ago, and says that he never thought his music career would take off after such a move.

’I’m really grateful to the Isle of Man, because I’ve only been here seven years but so much has happened in that time musically.

’I haven’t stopped working. Sending songs and believing in what I do for years and years.’

’Inspiration’ is out on May 19, and can be pre-ordered through Amazon. https://www.amazon.com/Inspiration-Ian-Thompson/dp/B06ZYBDSTT

First this week we head to Jaks in Douglas, where Ian Thompson and his band will be appearing this Friday night.

Ian is a man who I have often said it wouldn’t be wrong to give the ‘hardest working musician on the island’ award to due to his quota of live shows each year: he plays most weekends around the island’s public bars, venues and private functions.

His shows are split between his covers and original material.

This next show on Friday focuses on the pieces that make up his covers setlist.

Featuring classics from The Kinks, David Bowie, The Beatles, Simon and Garfunkel, R.E.M, and the like, if this sounds like the soundtrack to your type of night out then you can’t go far wrong.

Ian has enjoyed regular airplay over the years, on stations like BBC Radio Merseyside, BBC Radio Lancashire, Manx Radio, 3FM, and Energy FM, and international airplay in places like the USA, Australia, Italy and Holland.

For more information about Ian, his music and his forthcoming shows, please visit www.ianthompsonuk.com